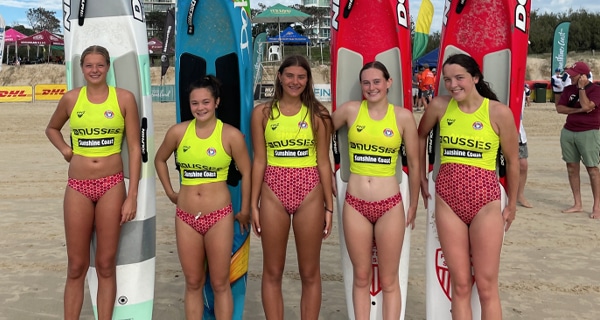 Despite a COVID scare and Brisbane lockdown, the Sunshine Coast turned on amazing sunshine and ‘not so amazing’ surf for a festival of Aussies competition, with back to back events over ten days. Portsea competitors arrived with enthusiasm and in numbers not seen in recent memory, 37 in total entered over the Youth, Open and Masters competitions, making us the biggest Victorian team in attendance. Five of our swimmers arrived via Age Swimming Nationals on the Gold Coast, where the best performed was Harvey Larke with a 20 second personal best and Bronze Medal in the 1500m freestyle.

In glorious sunshine the Youth were up first, the under 14 and under 15 age groups, Portsea one of only two Victorian clubs to field full teams in both the men’s and women’s arenas, with five girls and five boys proudly pulling on the red and white caps and club swimwear that stands out in the crowd and always gets us plenty of kudos and commentary.

For our Portsea boys Henry, Flynn, Logan, Xavier and Archer it was all about soaking up the atmosphere and just having a crack at their first Aussies. It was a great learning experience about just how tough the competition is against the ‘northerners’. With smallish surf the boys all got around the course well in their board events, then Xavier and Logan placed 18th in their surf races, just missing out on going through to the next round. The surf teams’ race is a combined age group event with our younger U14 year olds performing well against the older competitors. Flynn came into the team for the Cameron Relay, courageously sprinting around the course with a recently fractured collar bone. Last up were the board rescue events with Logan and Xavier and Henry and Archer pairing up for the competition’s mock rescue race. 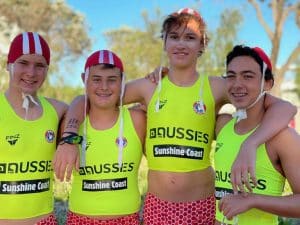 Down in the women’s arena first up was the iron, where Mackie showed her strength, one of only two Victorians to get through the first round, and the sole Vic representative to get through a second round to the semi-final of top 32 in the country. Next up were the swim events and then the board, with Mack and Gemma though again to the semi-finals in the surf race. Team events were the following day, with Hannah and Arabella joining in for the Surf Teams, and Emerson in for the Board Relay and Cameron. All the girls showed such determination, out-sprinting competitors on the finish line to improve their placing each time. 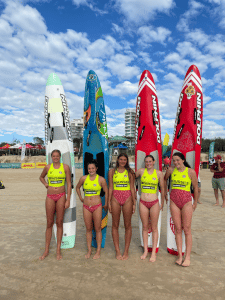 Boards packed away and back on the trailer it was time for a Portsea Team Dinner at the Maroochydore RSL, where nearly 50 Portsea touring team members, family and supporters celebrated the carnival events together.

Next morning it was time for our Masters to take to the stage, highlighted by our SILVER medal in the 170+ Mens Beach Relay with Brett Croft, Jim Unkles, Darren Kerr and Henry Kiss performing for the crowd of red and white supporters, with Jim and Henry also finalists in the Beach Sprint. In the water events we had numerous combinations of ages racing in swim, ski, and taplin teams, everyone enjoying the camaraderie of years of training, racing and patrolling together. Best results included our president Matt Mahon and Dave Flockart pairing up for 6th place in the 45-49 years double ski, and Anthony Purcell 10th in the 50-59 years surf race, then joining Stu Larke and Cam Hunter for 6th place in the Surf Teams. Nat Hood’s first Masters was short lived, snapping her Achilles in her board race, then spending the next week pacing the beach with crutches and a moonboot!!

The grand finale was the Open Aussies where we had ten U17-U19 competitors, plus a couple of Masters helping out the teams. Highlights from the U17 men included Xavier Purcell reaching the final of the U17 Surf Race, placing 23rd, plus an amazing performance of Ned Betts, Harvey Larke and Xavier Purcell making the final of the U17 Board Relay, even more impressive given they are all bottom age, coming off a winter of Melbourne’s COVID lockdowns. Charlie Deacon joined the boys for the Surf Teams event before heading down with the team to shine in the beach events. The commentators gave a huge ‘shout out’ to the Portsea Opens Men’s Surf Team where two father/son combos of Stu and Harvey Larke and Anthony and Xavier Purcell paired up in what sums up the ‘spirit of our multi-generational team’, with the young guns both taking line honours over their dads.

In the U17 women’s arena Steph Hunter made the final of the U17 Belt Race, placing 7th. It’s quite nostalgic seeing the historical piece of rescue equipment, the reel, back on the beach, with the team’s handlers brushing up on the lost skill of paying out line. She then teamed up with Georgie Kerr, Charlotte Mahon and Sophie Courtney to race as many other individual and team events as they could. It was great to see these four young women, who raced Aussies together two years ago as U15’s, return again to the sport they love. Steph and Charlotte paired up for double ski, and all four girls showed great team work in the Rescue Tube Rescue Race, narrowly missing a place in the final.

The beach arena at Mooloolaba saw our U19 men Griffin Mitchell and Oscar Hunter cross between distance running and sprinting. Their best result was 5th in the 2 x 1km relay, and 4th in the U19 Beach Relay, where they paired up with Ned Betts and Charlie Deacon. Relay night was a highlight for Portsea, when our U17’s all headed down to race under lights and we saw Portsea’s colours in multiple finals in the U17 and U19 beach relays and mixed beach relays.

The surf boat events at Alexandra Headlands had multiple rounds of racing and culminated with a 5th placing in the final by our Open Women’s Boat crew of Amanda Rukuwai, Amelia McColl, Emily von Moger, Alexandra Hagan and Stephen Blewett (sweep), taking the honours as the top placed Victorian women’s crew. Charlotte Travers jumped into a seat for the short course boat races earlier in the week which served as a great warmup hit out for the girls.

Lastly the 2km Ocean Swim event at Mooloolaba was listed by many as their favourite event. Best results were: Harvey Larke placed 9th in U17 men, Mackie Hunter 11th in U15 women, Logan Brandi 21st in U14 men and Anthony Purcell, 11th in Masters.

As events drew to a close the remaining team members gathered for a final dinner at the Maroochydore Surf Club and began planning for the season ahead. The next Aussies were announced: April 2 – 10 over in Perth and Portsea members are already booking to “Go West with the Crew in ‘22”. If you’d like to be part of our Competition Team please get in touch. Focus areas are the U17 and U19 age groups, with a new plan to target beach events and surf boat crews. Under 13 events are being added to the program for the first time. We know you won’t regret jumping on board.