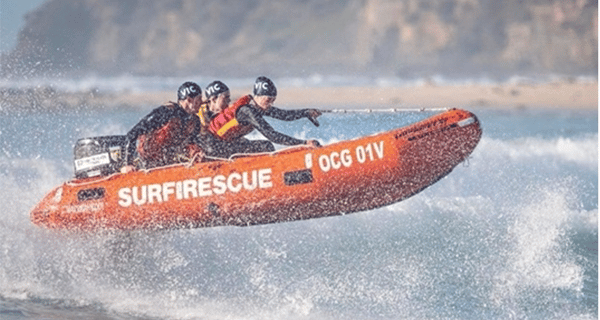 As a second season from the reinvigorated Portsea IRB Racing Team draws to a close, a tight knit team of four athletes travelled 900km north to compete at the Australian IRB Championships. Racing on the shores of Mollymook in NSW against 31 other teams from Queensland, New South Wales, Western Australia and New Zealand; facing enormous powerhouse clubs of nearly 40 members, with numerous trailers of equipment and generations of knowledge. The humble Portsea team knew it was up against some serious competition. 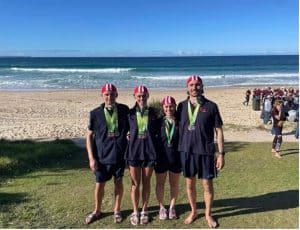 On the first day of racing, the entire four-day competition schedule was thrown out the window with forecasted six to nine foot swell towards the end of the week. Open division races were prioritised, and the field was thrown into the deep end day one; with nasty shore breaks, heavy onshore winds and sizeable waves passing through the turning cans out back… nothing new for our Portsea team. Over 50 boat flips and ejections ensued over the coming days of competition, and the nerves were certainly brewing as finals drew closer, but Portsea was still in the running having already passed through two rounds of heats, quarter-finals and semi-finals.

The Open Female Tube final approached, with Sas McNamara (driver), Sophie Courtney (crew) and Finn Nicholas (patient) looking to outperform their gold medal at State Championships a few weeks prior. The weather gods granted them a poor run out to the turning can, placing a tough burden on the two swimmers. However, the team nailed their pick-up and flew home in second place, rewarding the team with silver medals at the Australian IRB Championships in the Open Female Tube. An outstanding performance by Sas McNamara, Sophie Courtney and Finn Nicholas! 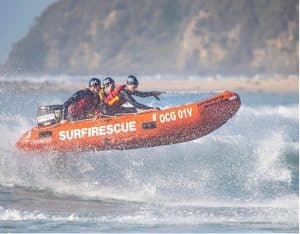 The next day, the commentators confirmed that our next significant race, the U23 Male Tube final would be the last race of the day; with a heavy front of rain and wind only minutes away. It was Finn’s first time driving the highly technical tube event in leu of our specialist tube driver Niklas Rathmayr’s absence; and Sophie, accustomed to crewing/swimming for the female tube found herself in a new role as the patient. Following disheartening results from an unlucky performance in the Open division the day prior, the adrenaline was high. Astonishingly, the first boat seen dropping over the tall wall of water, and crossing the line was Portsea, cementing Finn (driver), Andrew May (crew) and Sophie (patient) as the Australian Champions in the Male U23 Tube event! 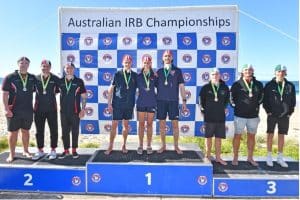 Finally, the last day of competition consisted of inter-state races. With the state’s most elite athletes selected to compete in a “state of origin” style competition determining a Champion State. Remarkably, all four Portsea competitors were selected into this team and granted the privilege of representing Victoria. They all performed very well, giving their 100% and challenging the powerhouse NSW and QLD teams in straight final Tube and Relay (Taplin) events. The Victorian State Team finished second overall, with QLD crowned this year’s champions by a very small margin. 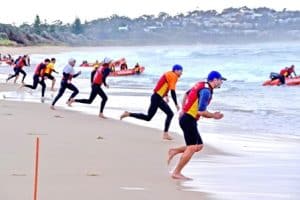 Overall, this fantastic performance at the Australian Championships concludes a strong season of IRB Racing for Portsea. Our team has made leaps and bounds over the past season seeing strong improvement across the entire racing season; all of our members have brilliantly grasped and adopted advanced IRB skills in the thrilling environment of IRB Racing. Incredibly, we achieved fantastic results in both state and nationally recognised championships bringing home skills, experiences and most impressively podium positions. We are super excited for next season and are looking to continue our momentum into 2023, of course with a few months of well-deserved rest. We would like to thank the Portsea Committee for their support, as well as various other clubs such as Brighton, Hampton and Port Melbourne for their training facilities. Finally, a massive congratulations to all the committed IRB racers who competed throughout the season.

On behalf of Portsea’s IRB Racing team, we invite and look forward to expanding our team into the coming season. 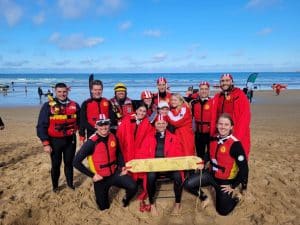 We cannot wait for the 2022/23 racing calendar to begin. If you are interested in IRB racing, get involved next season; please reach out to the IRB Captain, Blair Nuske right away. blair.nuske@portseasurf.com.au